I just found a cool new beauty app for my phone…and I’m “dying” to share it!

Perfect 365 is an awesome new app (new to me, at least), to touch up your everyday photos. Giving you the power to change everything from hair color and style, to fixing blemishes and softening skin texture, this app is easy, fun and most of all, the basic version is free!

With a few clicks and swipes, add or enhance makeup, take that new haircolor for a test drive or just add a little gloss to lips that otherwise ruin a perfect pic.

You can select from pre-set looks and change them as you see fit or start from scratch and go step by step to create a new look, wild or mild. Most steps give you a slider bar to determine how dramatic you want color or intensity.

And, the hair section allows you to drag sections of the selected “wig” in, out, up or down, to get the shape and volume you desire.

For best results, select a photo that’s relatively close up and straightforward – the app does allow you to manually select a face and/or reset where enhancements go, (i.e., eye color), but it’s a multi-point feature that complicates the entire process.

While the lavender hair and blue eyes above are a bit extreme (I’m blonde, naturally brunette, with brown eyes), you can go simple, too. I originally played with the app just to change my eye color (I’m a big fan of colored contacts) and clean up some pics of my husband and me that were a bit grainy due to bad lighting and poor camera quality. Now, the more I play with it, the more fun I have!

Do everything from slim your face to lift your cheeks. Shape your brows, enhance your lashes and even remove bags under your eyes or enhance your smile. All up to you!

As mentioned, I find forward facing and close up shots are easiest to work with, especially as you’re getting used to how the program works. The photo I started with for these? Not so flattering. I’m tired, I’m cranky and well, what the fuck else is new? But, playing with Perfect 365 gave me a little confidence boost!

Notice I’m in the lip section, where I have options to deepen my smile, whiten my teeth, change lipstick color and add gloss. The slider at the right side, lets me determine how broad/white/dark/shiny the above options are, respectively. Hitting the “Compare” button will show you the original pic, so you can see your progress at each stage, from the original photo.

I also showed my husband what he can expect when I start to go grey! Thankfully, I haven’t yet (not that I really care – I color anyway). But, I’m not so afraid of it once I do! I did use a similar, but different photo for this one.

Another perk – going through drama with my 21 year old son, there’s been a lot of accusations about him not being “mine”. This app allowed me to change my hair color back to my natural color (or close) and my eye color to match his (which he got from his sperm donor – long story), to do a side by side comparison. Very few doubts now! That alone made this app a keeper! Same base photo as the silver-haired one above.

Wanna be a Mermaid for a day? Have at it! While I’m unnaturally tan right now, because hubby and I have been spending a lot of time at the river, you can have that golden glow with the foundation feature! Or, go more ghastly by using a lighter foundation and brightening the skin!

This one cracks me up! One of our wedding pics when Craig, my husband, and I got married. Just the haircolor (I’ve been a redhead many times, and many shades) and style – I swore I was Reba!

The original? Since a close friend says I look very, *ahem* “Stepford” here…^^^

If you’re looking for a free (you can pay for extra pallets and high-def photos), fun and easy way to edit photos, change up your look or just try something new, Perfect 365 is an amazingly easy way to do that. Packed with features, even on the basic version, you can find it on the iPhone App Store (and I assume Droid users can find it…well…however y’all survive downloading apps).

I’m sure you’ve heard all about it.

You’re probably sick of it, in fact.

So, what’s the big deal?

I admit – I’m hooked. My 21 year old, gamer son and I had a conversation about it prior to its release. I didn’t really understand the big deal, until my FaceBook blew up with media frenzy and friends either singing its praises or loathing its existence.

I played Pokemon back in the day. For one, it had bats and in case you’re new to my blogs, bats are my thing. This was before “Twilight” and the vampire romance craze that made bats more socially acceptable and readily available. It was one of the few video games I got into, after Nintendo cartridges (you know…the ones that resemble 8-track cassettes, that frequently required cleaning by blowing them out). Granted, I’ve played a few on my phone and computer, but for the most part, I’m not a gamer.

Now, I do understand some of the reasons people hate it, without even giving it a fair “go”. I’ve already seen several stories of obsessed players, stealing critters and cheating the system. I’m also one of those people who refuses to pay real money for advantages in a game, which, like most video games these days, you have that option.

I also see the concerns regarding playing while driving; looking at the phone instead of the road. Not to mention, that really defeats the intended goal of the game. I’m not saying that I won’t necessarily have mine on and be checking while my husband is behind the wheel, but it’s a valid concern. After all, you can’t fix stupid.

The idea, however, when used as intended, is brilliant.

Just like back in the day, the object is to “catch them all”, build them up, help them evolve and use them in battles. The twist though, is the brilliant idea to merge the days of going outside to play, with the video game/cell phone generation.

The critters are largely based on location. Which means, you have to get up and move in order to locate new, rare and different Pokemon. For example, living in the Gods-awful Arizona desert, I catch a lot of snakes, bugs, rodents and birds. Pretty accurate.

In order to expand my collection, travel is required. Water creatures will be found near oceans, lakes and rivers. Mountainous areas hold their own special population, just like real animals in their real environments.

While I’ve built up a pretty impressive collection just by walking around our yard and neighborhood, variety is the spice of life. And, that’s the key. A special pop-up on the game screen shows you what’s nearby and an approximation on how far you need to go to have a chance at snagging it. The more footprints associated with a picture (denoting you have that particular Pokemon in your collection already) or silhouette (announcing this particular critter is new to you), the further away from your current locale. Think of it like a cross between a treasure hunt and Easter egg hunt – the game tells you if you’re warm or cold, to a degree.

Now, if you’re like me and refuse to pay for more Pokeballs or incense (used to help lure Pokemon to your location), potions and sprays to heal them from battles or magic berries to make rare Pokemon easier to capture and keep (they can break loose from the Pokeballs), the next cool part of this concept comes into play.

Areas like public parks, museums, art exhibits and malls have what’s called PokeStops. A symbol appears letting you know one is nearby, which will gift you with some of the aforementioned goodies, once every five or so minutes while in range. Now, we’re getting a bit of culture, social interaction and a new experience or two. 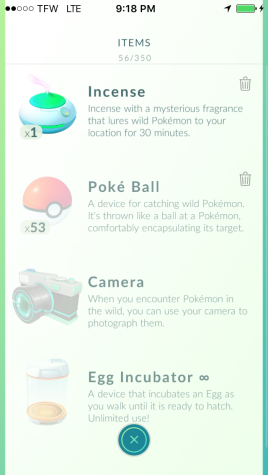 A good friend of mine brought up another benefit I hadn’t previously considered – since you’re required to throw the Pokeballs to catch the Pokemon, it takes a fair amount of patience and dexterity to learn how and when to best capture them. Hence, improving mental and physical agility and coordination.

Love it or loathe it, used as intended, Pokemon Go could be a serious “game changer” in the battle against obesity, laziness and narrow-minded ruts. Hell, I’ve walked more in the last 24 hours trying to catch the little shits, than I typically do in a week.

Highly addictive, so many people are playing, servers can’t keep up with the demand. I’ve found later in the evening has been the best time for me to play and stay connected, even though they note on the website that they are working to resolve the issue.

Of course, there’s more to it. I have yet to find a PokeStop or what’s called a Gym, in order to establish a team or participate in any battles, so I can’t yet form any opinion regarding that. Then again, we live in BFE and it’s only been a day.

While the game does walk you through all the basics when you first download it, the Pokemon Go website does offer a lot of very useful information – especially if you’re just curious and not ready to commit to the free download.

The game also reminds you, every time you load, to use common sense. As discussed, don’t play while driving, always be aware of what’s going on in the real world and when picking a user name, don’t use anything personal or sensitive, like your real name.

Like anything, please play responsibly and before you judge, give the notion a GO!

Proud to announce we have FINALLY resolved the technical issues with posting here on WP! I have lots to share since last time I posted!!! I will be updating soon! After a very long night of food an…

Proud to announce we have FINALLY resolved the technical issues with posting here on WP!

I have lots to share since last time I posted!!!

I will be updating soon! After a very long night of food and fireworks, I must say, it’s bedtime for this bat!

Check back soon (as in, later today, most likely) for exciting news about finding my son after 19 years (rather, he found me), an exciting 35th birthday for your hostess with the mostess and a ten day road trip to my home town in NY for my first wedding anniversary! Tons of fun to share!

Of course, beauty and humor and more, oh my!

Stay tuned! And, if you haven’t already, check us out on Facebook for daily posts covering everything from beauty and fashion, to DIY and crafts, fun facts, humor and more!

Thanks for “hanging” with us!
💜

Just a small town girl who writes about Christian stuff.

Funny every damn day. Follow us on IG @SMD.LOL

This journey will take us around the world in the search of locally made products that are 100% natural and have never been tested on animals.

Food Game On Point, Y'all

All things fashionable and fabulous

Modest Fashion for the Modern Woman!

Recipe hoarder and all around happypants. Saucy? You bet.

a place for all things beauty and beautiful